In a place where grocery stores carry no less than five varieties of British cheddar and every village has at least one Indian restaurant, the Brits are no strangers to the Algarve, Portugal’s beach paradise.  So it’s no surprise that when we stepped out the door this morning we couldn’t help overhearing conversations taking place along the beach and in shops.  Two families from separate parts of Britain, overheard at the beach – I can’t believe it.  I never thought it would happen.  At the pastelaria, a conversation in Portuguese between the barista and older male customer.  Good morning, how are you?  Him, putting it mildly, disastrous.  Her, concerned, oh, why?  Him, Brexit!  It’s horrible!  He goes to his newspaper with coffee and juice to let the news sink in.  A British shop owner who has lived here for 30 years expressed great concern, echoing the views of the others – disastrous.  Other than people’s expectations and the exchange rate, little has changed yet.  But the cloud of uncertainty is floating in the air, casting a shadow on this cloudless day.

It’s a day we won’t forget.  Where were you when Britain voted BREXIT?  We’ll remember we were in the Algarve. 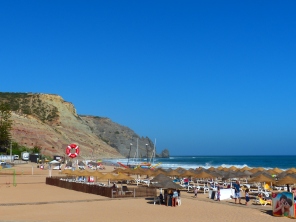