One of the most traditional events around Christmastime in Romania is the slaughtering of the pig.  Ask nearly any Romanian what Christmas means to them and the killing of the pig, a family affair, is almost always mentioned.  Santa Claus and presents are high at the top of the list, the birth of Jesus might be mentioned, but the pig is truly a big deal.

Our neighbors introduced us to their Christmas pigs when we arrived this summer.  This week we were present when the swine were dispatched to hog heaven in the most traditional of manners.  Just after sunrise we bundled up like Eskimos and tromped next door to observe the ritual.  For the children, I considered this a great educational and cultural opportunity.  Echoing my nonchalance about the whole affair, they remained undisturbed while the pig squealed like a shrieking eel and the blade slit the jugular in one brief motion. “Why is smoke coming from the blood?” they asked.  “It’s steam.  Blood is warm inside the body.  But when it touches the cold air and cold cement it makes steam.”  Oh, so many questions. Having recently watched the Magic School Bus episode on the human body, they were also eager to see the heart and other organs.  They were not disappointed.   Learning doesn’t stop on vacation!

The photos aren’t too graphic, but we made a video that spares no detail, complete with the vocal grace of Charlotte Church.   Click on the first photo and it will enlarge, showing the full caption and enabling you to click right to view the next photo in a slideshow.

Front row seats to the pig slaughter. I narrated for the girls while the pig was being restrained, cut and bled, emphasizing basic anatomy. “They cut the neck because there is a big vein and all the blood comes out faster. What happens when you lose lots of blood?” One daughter answers “You die.” I continued with my narration as if this was perfectly normal, which it is for rural Romanians, but still a little not-something-you-see-everyday for us.

A blow torch is hooked up to a gas tank and the hair is burned off and skin scraped clean. This takes at least a half hour, alternating burning, scraping, pouring boiling water to clean, repeat. 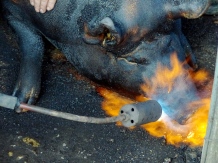 The skin glows bright orange under the blackened skin, which reminded me of the colors of a slow lava flow. 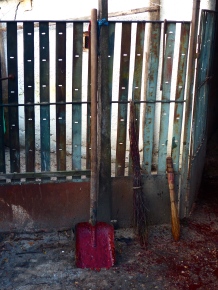 Tools of the trade. The shovel to scoop the coagulating blood off the floor. The brooms to sweep the flowing blood and water into the dirt throughout the entire process. 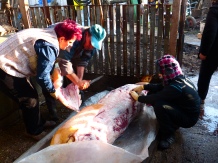 The heaving sides of fat and skin are removed in quarters. The granddaughter in the wool cap is thirteen. This was her first year to participate and she was so excited to be a helper. 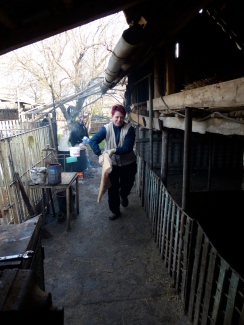 Every piece is carried down this gauntlet, passing next year’s Christmas pigs who are still kids. I’m pretty sure they knew something was up.

The congregation of meet, waiting to be processed. By the end of the day, only the toenails and teeth are left. Here I would like to make mention of the smell. I looks like it might stink, but not a chance! It was as cold as a refrigerator outside and everything was cleaned and processed before a hint of stench could form. In fact, it smelled most pleasantly of herbs and garlic, which were being added to the sausage mixtures. 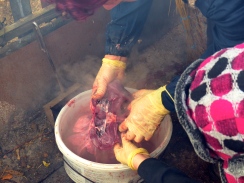 We never miss an opportunity for an educational lesson. Here I show the girls the chambers of the heart as steam rises from the ventricles into the chilled air.

All the fat from the sides was cut into chunks and rendered into lard. It took two full pots to melt and render all the fat.

Grinding the meat and seasonings for the sausage. 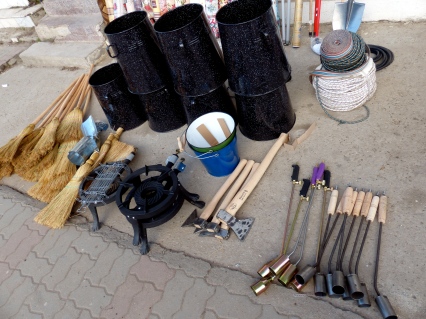 It takes a sharp knife to do the job well. Take your pick. This display was on the sidewalk at a local hardware store.

2 thoughts on “The Christmas Pig”