Memories of my childhood include horrendously glorious adventures walking up castle stairs with no guardrail or peeking over the ledge of an inadequate barrier to a cavernous moat many feet below.  I don’t remember my parents hollering “Stand back!” or “Don’t get so close!”  Being the responsible parents they are, I’m sure they did.  We are trying to instill similar memories in our children – no guardrails, ruins not built to modern codes and parents getting their fair share of sore throats yelling at the kids to be careful.  Prejmer gave us ample opportunity to practice those skills and instill lifelong memories of precarious escapades.

Built by the Teutonic knights in the early 13th century, Prejmer is the largest fortified church – a small cathedral with castle walls built around it – in southeastern Europe.  Having been besieged at least 50 times, it is still largely intact and is on the UNESCO World Heritage list (it did undergo some restoration in the mid-20th century). Built to keep marauders and Ottoman invaders at bay, many such churches with fortified walls exist in central Romania.  The walls of this fortress are up to 15 feet thick and contain about 270 rooms.  Each family in the village stored supplies in a room and dwelt therein when under attack. 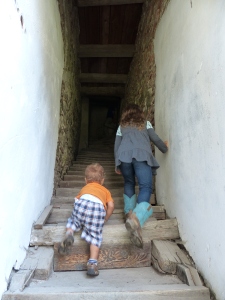 Our children loved this site, more so than most castles, because they were free to climb the deteriorating staircases (did I mention it was 500 years old?), climb up dark passageways and explore the inner chambers of the largely untouristed site.  Earlier in the morning we had mentioned to our host at the B&B in Brasov that we intended to visit nearby Bran Castle.  He scoffed.  Forget Bran!  It’s overrun with tourists and is not nearly as interesting or important as Prejmer.  We had never heard of Prejmer, but we aren’t ones to neglect the recommendation of a local host, so we added it to our itinerary.  We saved Bran for later in the day and attacked Prejmer Fortress by midmorning, before the hoards of potential tourists that probably never made it there. (I can confirm they definitely were all at Bran).

Most of the stairways, all accessible to guests, are hazardous for small children, so of course even our smallest insisted on climbing them all.   After my small heart attack, we directed them to the less treacherous tunnels.  I didn’t know where they led (signage is minimal), but at least there were no 30 foot drop-offs. 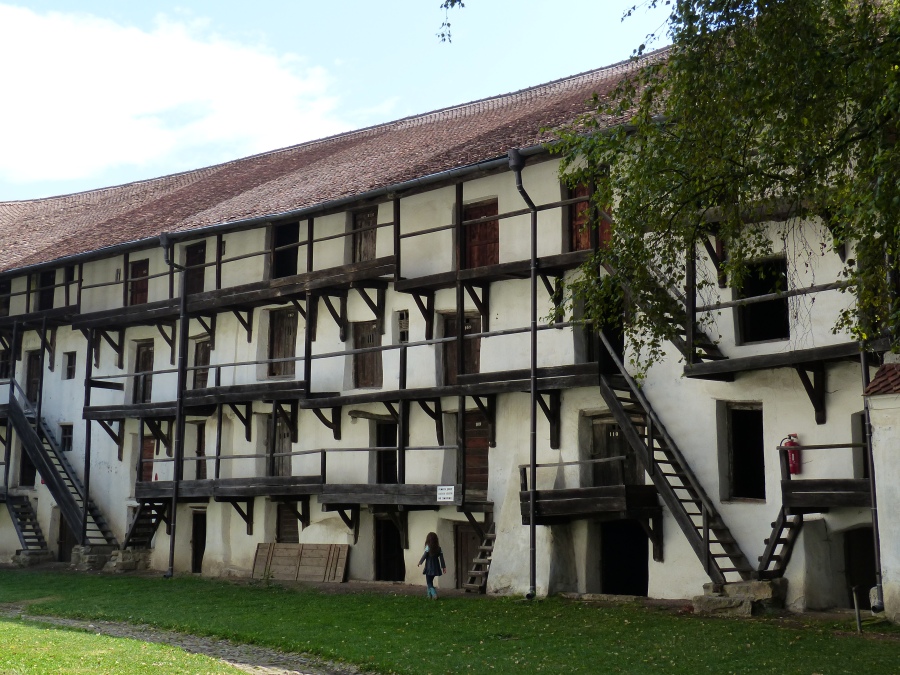 What a surprise!  The dark tunnel led to the top of the fortified wall which allows access to the completely enclosed perimeter.  Children who are old enough to be left to explore on their own would love this place! 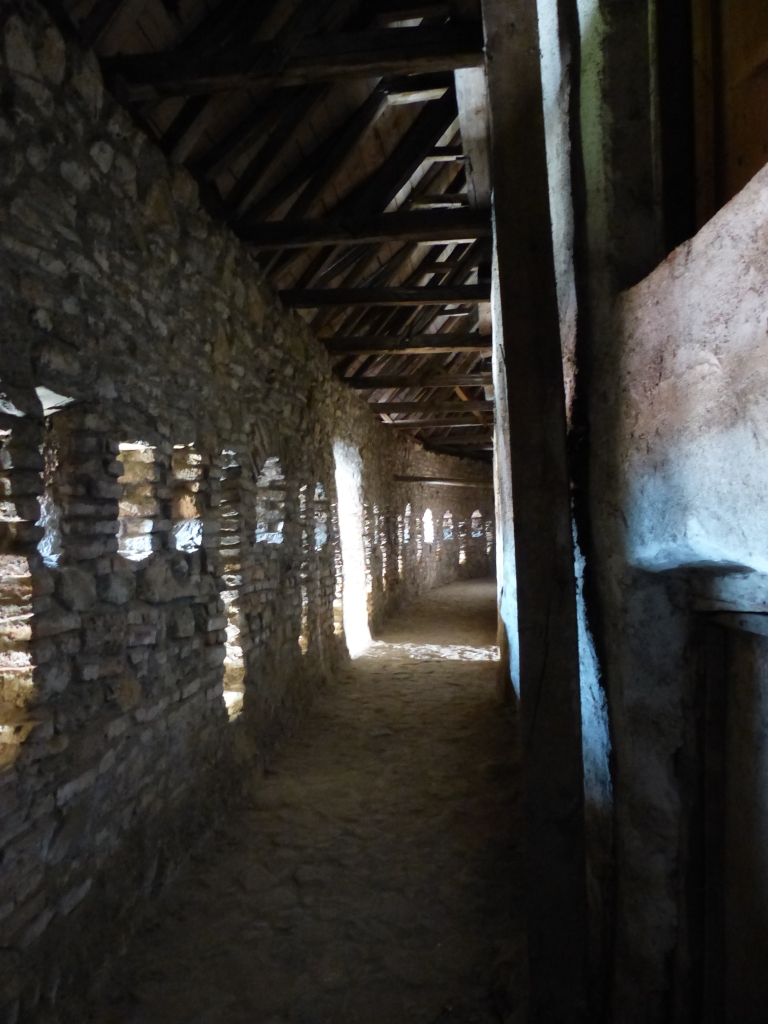 Like many of the churches in Romania, the chapel was modest yet acoustically perfect.  We christened it with the Doxology.  Several gentlemen entered while were singing and paused, listening to music they thought was coming from a sound system.  They were delighted and a bit surprised to find that the lady following the toddler and the guy sitting on a pew were the voices.  With the acoustics, it’s hard to tell where the sound comes from.  This isn’t the first chapel in which we’ve belted out the Doxology.  It is just something we do in some of the cavernous halls that now infrequently host worshippers. 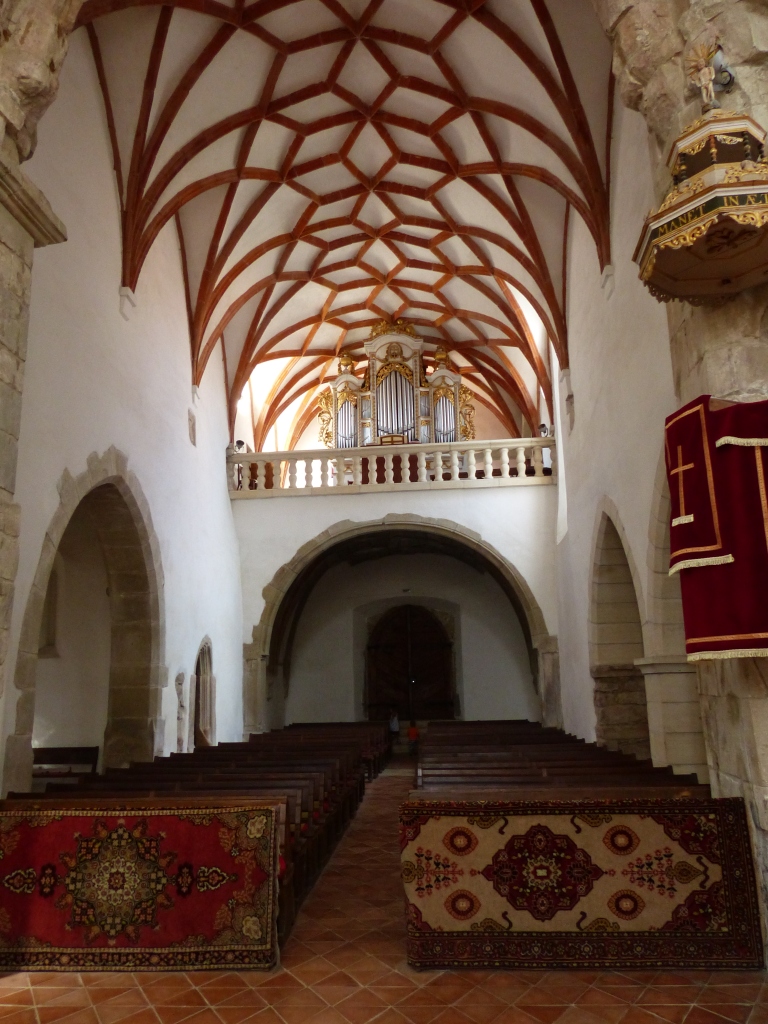 Some of the doorways leading to the family rooms are decorated.  Some of the doors also lead to museum-like rooms set up with scenes from the past – the school room or a home.

This site is well-equipped and prepared for marauding tourists.  A new parking lot for busses; landscaped entryways and sidewalks; clean, functional indoor toilets; and even a cross walk along a newly paved road show an investment in this fabulous historic site.  Even  cold drinks are available for those who visit on a hot summer day. We were glad we didn’t pass over the suggestion of our local host.