I am very privileged to have a Moroccan friend who lives locally.  She came over one morning to give me a cooking lesson.  Earlier in the month she had been sitting on my couch, relaxing with a copy of Saveur magazine, when the article on B’stilla called her name.  Flaky pastry dough is stuffed with layers of egg, crushed almonds and shredded spiced chicken.  We have to make this!  I will show you!  Definitely a sentiment I was happy to entertain.

When was the last time you got together with a friend to cook and delve deep into the kind of conversation that only can be induced after laboring with ingredients and then consuming the work of your hands?  It’s an all too rare event for me, I must confess.  In our culture the home cook usually labors alone.  All my necessities are within an arm’s reach – oven, mixer, open fire (in my case, a gas stove).  I don’t need to ask my neighbor to borrow a hot coal to start my morning flame.  I don’t send the kids down the street to the community oven to bake our daily bread.  I don’t stand across from my female relative, legs planted shoulder width apart, raising and lower a towering pestle as we rhythmically alternate pounding the grain in a cavernous mortar.

I have lived in and visited places where cooking and preparing the family meal is a long, laborious process.  Indeed, gathering and preparing food leaves little time for other profitable or leisure activities.  I don’t take modern conveniences for granted, but do lament that those conveniences allow us to be isolated in the kitchen.  For some, it may be a lonely place.  But few things are as bonding as cutting, chopping, mixing, pounding, stirring, frying, rolling, washing, skinning, peeling, grinding, frying, baking, dicing and – ultimately – breaking bread with a friend.  So, raise a glass and get to planning your next cooking get-together.  I know I am.

A recipe that calls for flaky crust and pigeon, as the one in Saveur called for, would not normally be one I place on my weekly menu roster.  But my friend prefers her B’stilla prepared with chicken, without scrambled eggs (yeah, one less step!) and always buys pre-made crust (Amen!).  Thus, this is much less daunting and time consuming that it appeared at first glance on the glossy pages of the magazine.  Additionally, the pies can be frozen after the initial baking to be used at a later date. 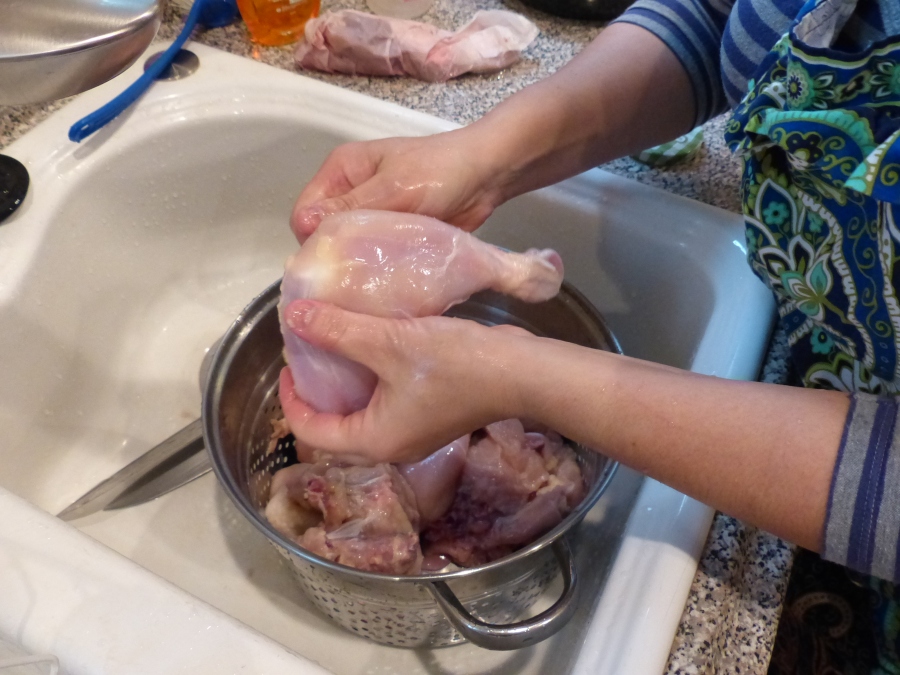 Rinse pieces of one whole chicken.  Pour lemon juice over pieces.  Sprinkle with salt and rub the pieces to remove the slimy membranes.  Let set in strainer for 10 minutes. 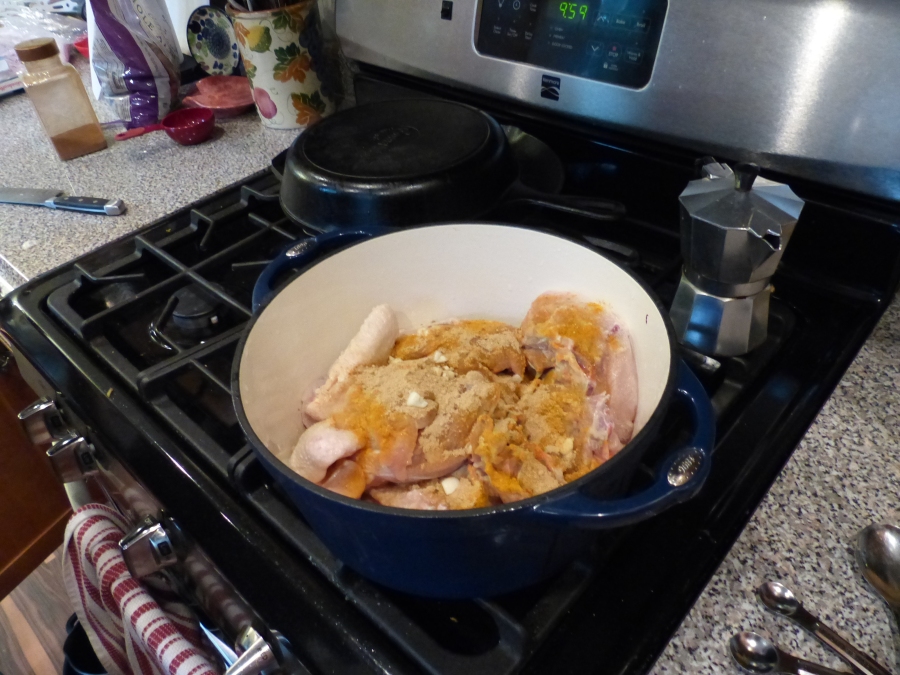 Chop two onions.  Place in bottom of Dutch oven (using as a substitute for tagine).  Place chicken in pot and toss with onions, 1.5 Tablespoons each ginger and turmeric, one diced garlic clove, 2 teaspoons salt.  Cook on medium low heat for about 45 minutes, stirring occasionally and basting with juices.

Remove chicken from pot to cool.  Remove one cup of broth to make a gravy.  Add 1 tsp cinnamon to gravy.  Remove meat from bones once cooled.  Break into small pieces in a bowl.  Pour gravy over meat.

While chicken is cooking, blanche (soak in just-boiled water) 2 cups raw almonds.  Allow to soak for 20 minutes or until skins are soft and peel off easily.  Pat almonds dry. 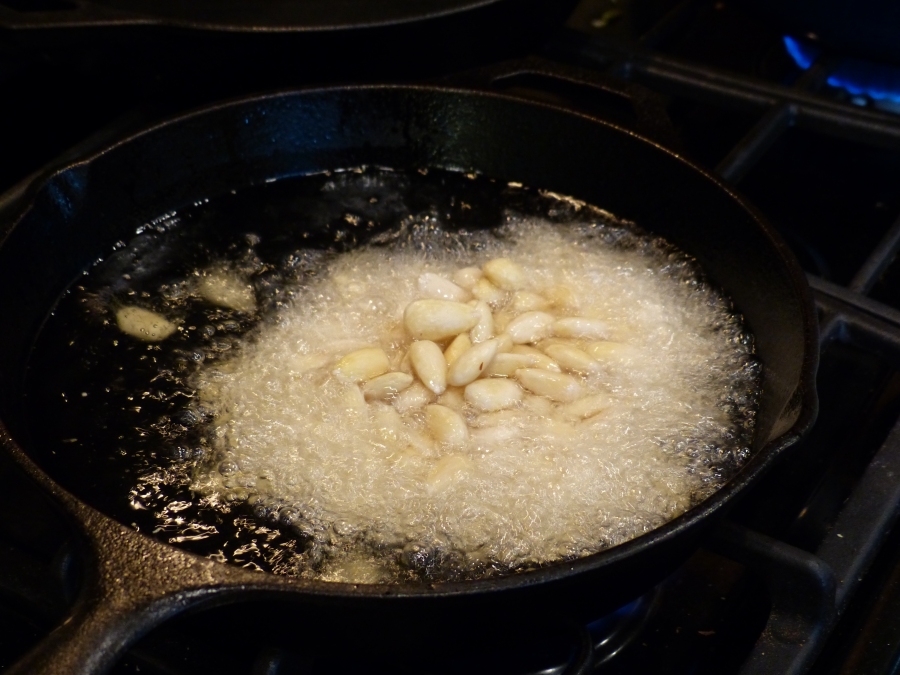 Heat canola oil on medium-high heat.  Add almonds and turn heat to low.  Stir so they cook evenly, about 5 minutes.  They will continue to cook once removed from oil, so take them out just as they begin to brown. 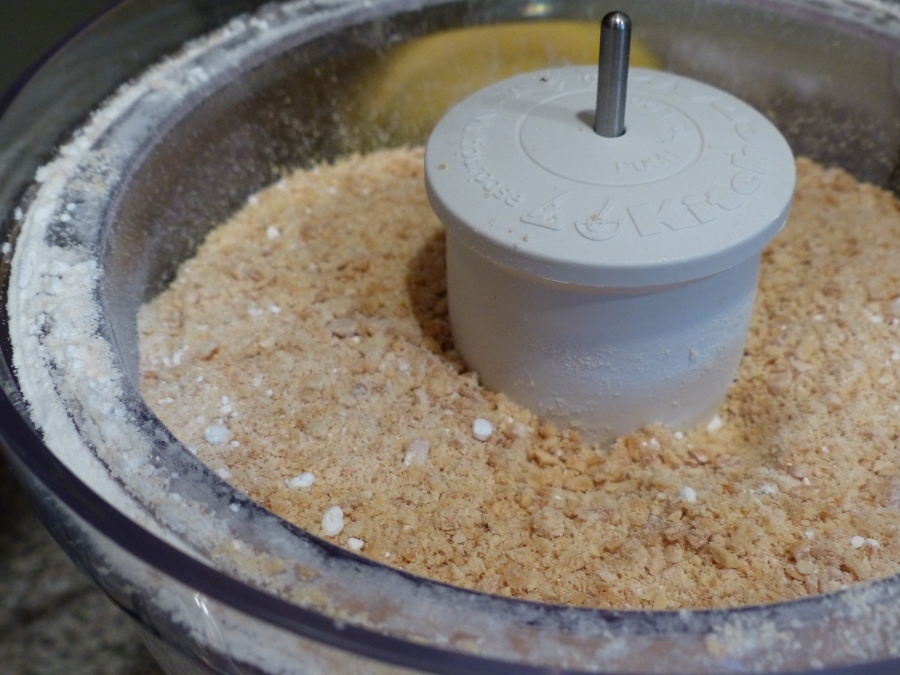 Sprinkle lumpia with generous portion of crushed almonds.  Add another lumpia sheet and baste with butter.  Place about 1/4 cup of chicken on next layer.

Generously baste lumpia edges with raw scrambled egg and fold up the edges, completely concealing the chicken and almond layers.  Flip over pie and cover with two more buttered lumpia sheets.  Use the raw egg as glue to keep folded edges together. 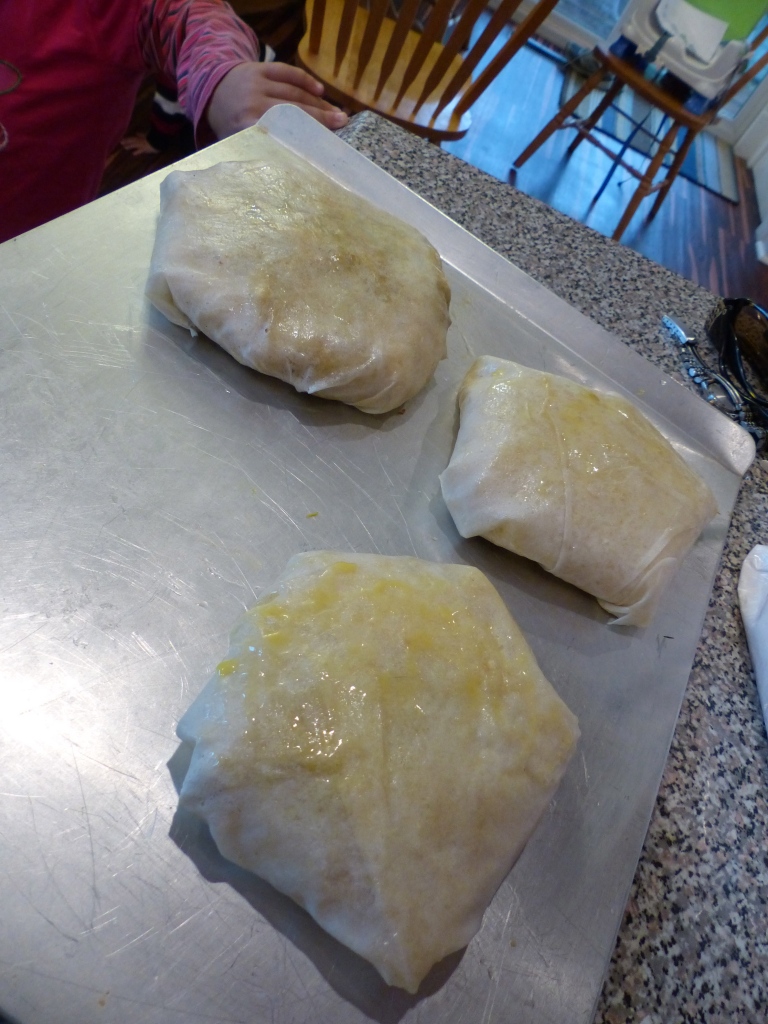 Place on greased baking sheet and baste with raw egg.

Bake at 450 Degrees Fahrenheit for about 20 minutes, or until golden brown.