One of Romania’s most impressive cultural and educational sites is the Astra Museum of Traditional Folk Civilization in Sibiu, central Romania.  Spread over more than 200 acres, it is Europe’s largest open-air museum, with historic structures- windmills, barns, churches, houses – from around the country transplanted on the lush terrain.  Romania’s diverse geography necessitated equally diverse dwellings through the ages.  Near the water, shacks on stilts from the Danube Delta region would not have been out of place in the Amazon.  The homes made of large sticks tied together, holes filled with clay resting under a thatched roof, could have been pulled straight from the neighborhood of my youth in Mozambique.  One can easily spend the entire day (and walk many miles) exploring the grounds of this living museum.  Fortunately, there’s a beer garden and restaurant smack dab in the middle so, should you reach your ethnographic limit, you’ve got other options.

Romanians value their cultural heritage and preserve it with greater vigor than many other countries.   One aspect of particular import is traditional singing and dance.  It is very important.  Lest you think I exaggerate, there are no fewer than five TV stations available in my home that show traditional Romanian music videos.  FIVE.  And, as I write this at nearly 10pm at night, my neighbors across the empty lot are playing one of those stations at full volume, as they often do.  My other neighbors will sometimes put their old tube TV on a rickety table on the porch so they can hear the music while hoeing their garden.  The sounds of Romanian music wafts through the air nearly 24/7.  Though the blaring volume can be an annoyance, I’m mostly relieved it’s not imported pop/rock/hip-hop/etc (and our windows close with a tight seal that blocks out the sound sufficiently at night).  I appreciate that they love their traditional music.  And to make those traditional music videos, they often film at the village museums.

When we strolled among the wooden cottages with steep thatch in the Maramures Village Museum in Sighetu Marmației, a stone’s throw from the border with Ukraine, young folks in traditional dress swayed with the music and lip-synched as cameramen recorded.  Another music video.

The Muzeului Câmpiei Boianului in southern Romania probably won’t host a music video session any time soon.  We passed the museum many times, but never stopped.  When we finally did one day, I was completely surprised.  Though small, it packs in a wealth of history. The dwellings are recreations of homes found in this region, from a dugout cave to a Hansel and Gretel-like cottage that looked to be pulled straight out of the forest (it probably was).  Of particular interest are the neolithic dwellings.  I felt like I had stumbled upon an African village.  Like many sites off the beaten track, they get very few visitors.  Those are the kinds of places that warm my heart.  (My first job was to man the gift shop and hand out audio tours at an international ethnography museum when I was in middle school.  We also didn’t get a lot of visitors, so every time the bell rang and someone walked through the door, I truly appreciated the effort they made to stop by and check it out).

Have I mentioned that we travel with kids?  On a beautiful day on the road, if stopping at a real village is not possible, the local muzeu satului is a good alternative.  Access to toilets, educational (“Look kids, a shaduf, just like the ones you learned about in ancient Egypt!”), and plenty of room to run.  Of course, if you only stay in Bucharest, the National Village Museum might be the only glimpse you get of how many Romanians in rural areas still live day to day.  In Romania, you’re still more likely to see a shaduf in use than in a museum.

The Astra Museum Complex near Sibiu, on a summer day. 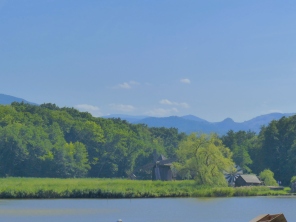 The Astra is a living museum. The children received cuts of herbs and were scolded for chasing the ducks in the yard.

Ah, a bench! Every time I saw one it was in a smoking area.

On the day we visited the Astra, there was a youth folk singing competition. 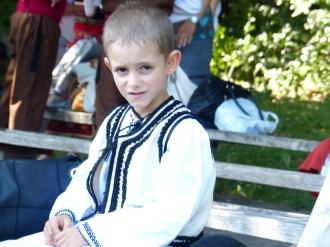 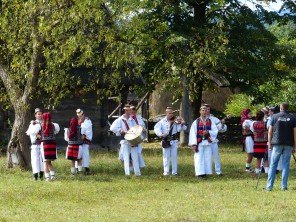 These young folks were recording a music video and found a ready-made traditional village at the Village Museum in Sighetu Marmației on Romania’s northern border with Ukraine. We were some of only a handful of visitors that day, enjoying the wooden churches, bales of hay and historic homes from the Maramures region, moved to this location to be preserved for future generations.

The Muzeului Câmpiei Boianului in Drăgăneşti-Olt. All the dwellings are recreations of the types of homes used for the past 6,000 years in this region. Neolithic settlements have been unearthed and served as a guide for the oldest dwellings, pictured here. A modern house, fully furnished, shows a typical Romanian village home. There are a variety of other structures and a small chapel.

Are we in Africa or Europe?

Homes constructed in this style and with these materials can still be found in many parts the country.

A house built under the earth – a cave, essentially. An ancient style of dwelling that is super energy efficient. After a millennium, they might come back in vogue.